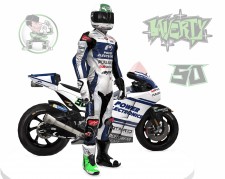 Fans of POKEMON Go aren't the only ones finding surprises in an App. MotoGP the world's premier class of motorcycle racing recently launched it's new App, MotoGP Championship Quest. As race fans are finding out, it has it's share of surprises. When Eugene Laverty paid tribute to the man he was named after, a family friend and fellow racer who tragically lost his life pursuing the sport he loved, he took to the track in a new helmet which has now it has found it's way to the game.

Sachsenring, Germany, July 14, 2016 (Newswire.com) - ​At the start of any MotoGP race season the riders are issued with new leathers and helmets which feature the teams official sponsors. While the leathers remain fairly consistent, the helmets of the riders change from time to time to reflect a special event or to commemorate a special occasion.

Such was the case at round 7 of the MotoGP series when Eugene Laverty, the Irish rider of the number 50 Team Aspar Ducati honored a close family friend and champion motorcycle racer Eugene McDonnell by taking to the track at the in a replica of his classic helmet with a distinctive Irish Green design which Shoei faithfully reproduced for Laverty’s race weekend at the Catalan Grand Prix in Spain.

McDonnell who tragically lost his life racing motorcycles just a day after Eugene was born, 30 years ago is the man Eugene was named after. Eugene and wife Pippa were joined at the race by three of Gene's brothers in this special tribute which honored the life and passing of a very special man. Sadly, this came on the weekend of the tragic loss of Luis Salom which came as a solemn reminder of the incident which occurred 30 years prior.

Pippa decided to take the tribute one step further and reached out to the developers of MotoGP Championship Quest, the official mobile App of MotoGP to have them reproduce the same helmet for Eugene’s character to wear in the game. This required photographing the helmet and then creating a new 3D model which was applied to Eugene’s character for every player of the game to see.

This special tribute will find its way into the pockets of millions of MotoGP fans the world over as they download and play the game as the App is updated on the 15th of July. It will also feature the GOPRO Motorrad Grand Prix Deutschland Sachsenring track, to coincide with the German GP this weekend.

The developer of the MotoGP App, WePlay Media has an active interest in reflecting changes such as this in the game. Graeme Warring, co-founder of the company, attends most race weekends and is always on the look out for “interesting” stories which can make their way into the game. “We don't just make and publish the App, we are fans of the sport and like any fan we take interest in the small changes and the nuances of the paddock. When we heard of Eugene’s tribute we felt it was something the fans would really appreciate. It is after all a very sobering reminder of the risks the riders take, pushing themselves to the limits and doing so for the love of the sport and for fans entertainment”.

MotoGP Championship Quest is the official App of MotoGP and can be found in the Apple AppStore and soon the Google Play store for Android users. http://apple.co/1SBSaY7

About MotoGP / Dorna Sports
Dorna Sports is an international sports management, marketing and media company, founded in 1988. The organisation has its headquarters in Madrid, and further branch offices in Barcelona, London and Tokyo. Dorna has been the exclusive commercial and television rights holder for the FIM MotoGP World Championship since 1992. With more than 60 years of history MotoGP™ is the pinnacle of motorcycle racing. Dorna has an all-encompassing Grand Prix event management philosophy, with 360º direct involvement in all areas of the MotoGP™ World Championship. Dorna has additional involvement in further motorcycling events, such as the World Superbike Series, FIM CEV Repsol, the Asia Talent Cup and the Red Bull MotoGP Rookies Cup, which seeks to promote the development of the next generation of riding talent.

About WePlay.Media
WePlay.Media was founded by 20-year video game veteran Mark De Simone and his partner Graeme Warring to bring to market AAA quality experiences and content to mobile. While games are often what the company produces, it sees itself as a media enterprise, producing content for the mobile audience who spend more time looking at their mobile devices than they do the television. The company has produced mobile apps for major international sports franchises, Hollywood movie studios and syndicated television producers. It is based in Phoenix Arizona and has offices in Manila, Philippines and Shanghai, China.